How are we doing compared to the previous Astronomy site?

There was an older Astronomy site that was closed 3 years ago for lack of activity. I wasn't around then - nor was I around for the start of this incarnation - so I have no idea what it was like back then.

How are we doing compared to the older site? Have we fixed problems that came up then?

I didn't participate on the previous Astronomy site, but you can read about the reason it was shut down in When a Site Grows Quiet. The key point is:

But when a site struggles to maintain any semblance of steady progress — when it's struggling to garner an audience, a healthy core of experts, and a steady stream of questions — it becomes increasingly unlikely that the site will find a core audience to sustain it.

If you look at the final Area 51 statistics of the previous Astronomy site, you'll see that it was getting around 350 visits and one question a day after about 11 months of operation. Considering the popularity of the topic in the public imagination (look at the number of images of Pluto people are posting on social media right now for evidence), this seems disproportionately quiet. Our general Physics site appears far stronger.

When I look at the statistics for this iteration of Astronomy at about 11 months from private beta, I find that the traffic averages about 350 visits a day, just like the old site did. But this site got about double the number of questions a day. We've done a lot of research (including an experiment on Parenting) and concluded that the single best predictor of a site's future health is the rate of questions it gets.

Since the previous Astronomy site was shut down, we've changed our philosophy of how to handle quiet sites. Instead of shutting them down and waiting for someone to come along and reboot them (which is a lot of work and no guarantee of success), we now let sites run (crawl?) along as long as they don't descend into spammy backwaters. (This only applies once a site has gone public. We still hold back sites that perform poorly in private beta.) In practice, this has meant we don't shut down beta sites.

Thankfully, the future of this Astronomy site shines brighter than that. Currently, it's averaging three and a half questions per day, which puts it in good company. We aren't really close to talking graduation, but you can rest easy about closure. If you care about the success of this site, make it a habit to ask any Astronomy questions you have here. Remember, there's nothing wrong with answering your own question.

It's not dying, it is ill but stable. Here's the number of active answerers (with 2 or more positively scoring answers per week). A healthy site has upwards of 20 answerers per week, a moribund one struggles to keep 2. 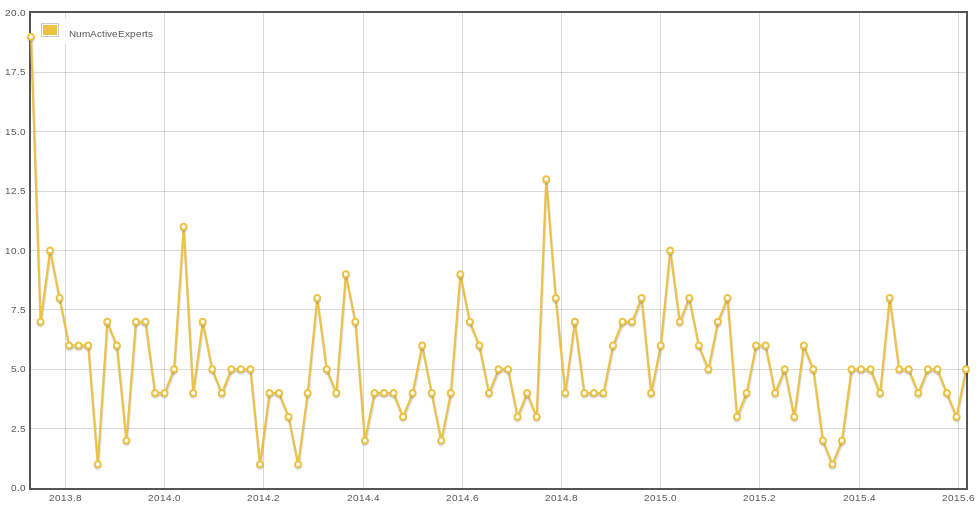 Not the answer you're looking for? Browse other questions tagged .

16
NOT READY FOR PUBLIC BETA — What function should this site serve?
8
How do we determine what geoscience questions are in scope?
8
Should we revive the Topic of the Week?
8
2017 Self-evaluation
0
I can't find this site's "homework policy" or find out how "suspected homework question askers" should be treated
0
Are all questions asking for simple explanations really off-topic? Or should we rethink the site's "purpose" statement?
3
A modest proposal to increase question quality
10
Let's make an attempt to answer old, unanswered questions
12
Do we need to downvote posts of New Contributors?