As was noted in comments below the question Is the longitude assigned to sunspots spherical or projected? it is impossible to create a sunspots tag.

Trying to do so results in the error message:

The tag [sunspots] is too similar to [sunspots]. If you think this new tag should be allowed, discuss it on meta.

I wonder if the tag existed once? It seems to be on some kind of "no-fly" list now. 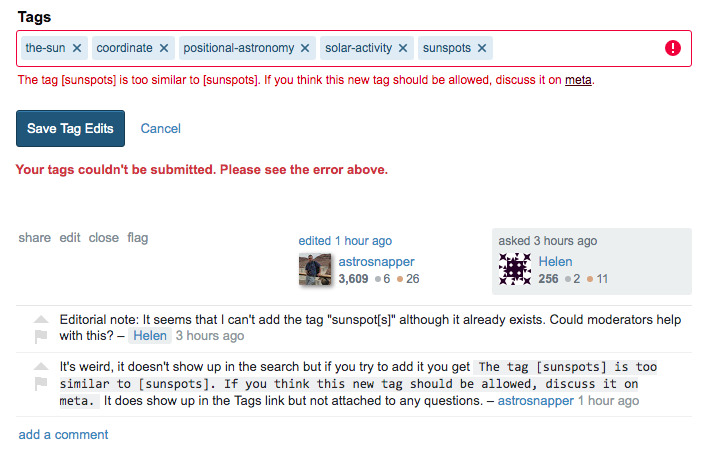 I've recreated the tag but if you want to keep it around for more than six months, find another question to add it to or give it a tag wiki. Or, if you decide that you don't want it, just remove it from the question and it will go away in 24 hours.

This hinges on a prohibition in tag creation coupled with a synonym where the master is deleted.

Long ago we made it so that the singular and plural versions of a tag could not be user-created - because usually that'd be confusing to have both except in rare situations. In many cases, if the singular tag is created first and someone wants to have the plural instead, it's possible, it just requires a mod to intervene to "force" the tag... and by "force" I mean to create it because they're exempt from the plural check. The other option (which is available to all users) is to remove the tag from all posts, wait 24 hours for it to be deleted, and then create the plural tag.

In this case, hairboat was super helpful by not only creating the sunspots tag, but also synonymizing sunspot to it to prevent both being used separately... unfortunately, in your case, the tag only got used on one post and was deleted.

The chain of events, as far as I can see is:

This is a suuuuuuper rare thing, I'm guessing... it's probably pretty uncommon for a tag with a synonym that's only one character off (plural) to get deleted and then tries to get recreated. Without the tag synonym, nothing would have stood in the way of creating this tag.

So, while we could probably poke at this and figure out how to handle this more gracefully, I'm not sure how pressing it is. Also, since mods can already override the tag creation, there's sorta already a solution.

Not the answer you're looking for? Browse other questions tagged discussion bug status-completed tags specific-tag .

3
Spectroscopy Spectrometry Spectra and Spectrum tags; is there room for some consolidation?

2
Do we have a newsletter?
10
Off-site Astronomy community promotion ads
2
Should we have a speed-of-light tag?
1
Stop the off-hand "this sounds like a homework question" comments that offer no guidance and raise false flags?
1
Removing the [ar] tag?