We've been in beta for almost 8 years. A look at Astronomy's vitals on Area 51 shows this: 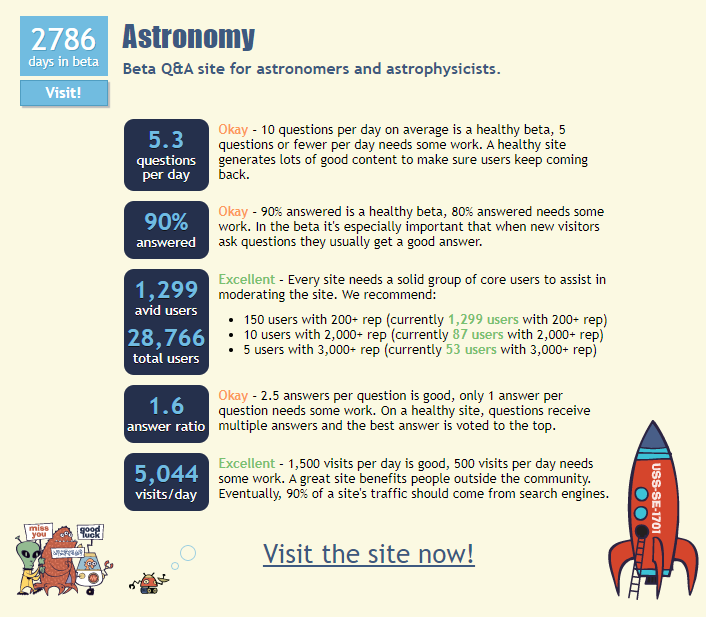 Our beloved Astronomy SE can't graduate until these issues have been resolved:

Do we have any solutions that can solve these problems within a timescale (preferably within the next 2 years)?

As called2voyage has pointed out, those metrics are both obsolete and . . . honestly, kinda awful when it comes to determining whether a site should really graduate. If I can steal the syntax of a particular Jack Sparrow quote, a community isn't just questions and answers and users and tags. That's what a community needs, but what a community really is . . . is something else, something intangible. I don't know what it is - a group of users? A place to interact? A set of established norms? All of the above? Something more abstract? It seems like a foolish question to ask, and maybe even a trivial one. But I've been trying to figure it out for about seven years now, and I'm really no closer to a simple well-defined answer.

I joined Worldbuilding at the very start of its public beta in the fall of 2014, and when it graduated a bit over a year later, it felt like it was ready. Granted, that graduation was triggered because we had consistently maintained the requisite question levels, those 10 questions per day, and this was in the age when these metrics were still driving graduation decisions. But we also had that little something extra, and fortunately, intuition about whether a site has that intangible edge has always been taken into account when making decisions about graduation. It wasn't just that our stats were good. I could feel it.

Even if graduation was still part of a site's expected life cycle - and it certainly isn't anymore, let's be clear - I don't think that at the moment, we have what it would take to reach that point. More relevant to your question, I can't even put my finger on what it is that we're lacking, what Worldbuilding had that we don't. Maybe we don't have enough users, or enough questions. Maybe we haven't really created a culture here that would survive many of the most prominent users suddenly disappearing in a puff of smoke (or a supernova - take your pick). I think it's all of those and then some.

Reflecting on it, I'm really glad that the idea of graduation has faded. Those stats (more like guidelines, as Mr. Gibbs would say) are certainly characteristic of many graduated sites, but don't mistake correlation for causation. You can achieve them without building a truly healthy, successful, stable community. As called2voyage said, let's just work towards a better site; if it really is crucial to the site's success, maybe we'll find the missing piece. But keep in mind that whether a site graduates is ultimately a meaningless, artificial and arbitrary goal. Whether a site is healthy and stable - well, ultimately, that means everything.

Not the answer you're looking for? Browse other questions tagged discussion questions answers graduation .

8
New to Stack exchange. What is Meta and Beta in Astronomy SE?
4
For multi-part questions, are both partial and complete answers encouraged?
3
An "Escalate to an Astronomer (in related field)" button?
2
How old is our Astronomy SE?
3
How to attract real-world radio telescopists to radio astronomy observational techniques questions?

5
Should tags reflect questions exclusively or the entire question-answer post
18
Let's ask more meaty questions!
9
Why have recent cosmology/astrophysics questions been closed as off-topic?
4
Should we add the eyepiece tag to all questions that are about eyepieces? Or instead delete it since tagging would be a hopeless, quixotic quest?
21
Graduation of the Astronomy Stack Exchange